Tibetans have known of this valley since at least the 8th century when it was opened to them by Guru Rinpoche (Padmasambhava) who brought Buddhism to Tibet in the 8th Century. In an upper side valley of the Gama system Guru Rinpoche is believed to have found a special meditation cave which we shall visit. From this cave we will then take a high, narrow trail over a pass to reach Pethang Ringmo at the base of Qomolangma’s East Face where we will camp for two days. Expedition members wanting to ascend all the way to touch the great snowy face of the Goddess mountain can do so from here.

Pethang Ringmo is a special place. On these meadows we find wonderful herds of wild blue sheep and considerable evidence of their predator, the snow leopard. To these meadows also come the Karta people with their yearling yaks to wean them. Usually a female yak can breed every three years because it takes two to wean a prior calf. But on the lush summer grass of Pethang Ringmo the young can be weaned a year sooner. For Tibet is a dry place, and green lush grass at high altitude is very special.

Across the Himalaya, only a handful of valleys do not have villages. The Gama Valley is one of these, protected as a core zone within the Qomolangma (Mt. Everest) National Nature Preserve of the Tibet Autonomous Region. This valley, located near the true biological base of Mount Everest, is known for its rich display of wildflowers, its ancient forests, pilgrimage sites, and spectacular views of four of the world’s six highest peaks.

Future Generations has made thirteen visits to this special place in the last 20 years, and the discoveries keep amazing us. Most exciting is the growth in wildlife populations, especially Blue Sheep and Snow Leopard. Due to conservation and habitat development, there appear to be more wild animals in the Gama Valley today than there were in 1921. 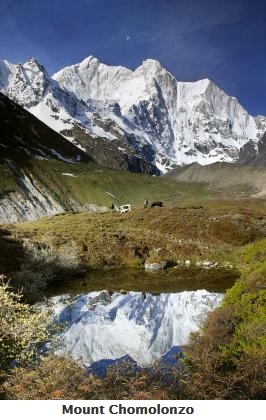 This is the furthest east in the Himalaya where forests can be found as high as 16,000 feet. Some of these trees are of gigantic size, standing 180 feet tall and twenty feet in circumference. The trees are there because there is a unique microclimate caused by the northern jetstream racing off of Everest, Lhotse (4th highest), Makalu (5th highest) and five other summits over 22,000 which causes a low pressure zone in the Gama Valley, and that pulls warm wet air up the Arun River from the plains of India. Hence the spectacular biology against the spectacular geology of the world’s highest summits.

The Gama Valley is pristine thanks to conservation efforts led by Future Generations. (A road to deforest the valley was being constructed in the 1980s when we began.) There are only a handful of valleys left across the length of the Himalaya that do not have villages. An article in the National Geographic Magazine, November 1968, powerfully describes the deforestation that was underway in the Gama Valley that was stopped by our conservation activities.

The link below connects you to a 55 minute film that will walk you through the whole Gama Valley from its bottom at 7,000 feet to the height at 18,000 feet where life stops. It is a “biological ascent of Everest” – an ascent that is possible in pristine habitat only here in the preserved Gama Valley.

A Planning Excursion to the Shadows of Everest

Your ticket for the: Introduction to Gama Valley